Meet the Women Who Conquered Antarctica

"There was simply no way I wasn’t reaching the South Pole. It was the hardest thing I have ever done..."

Close your eyes and imagine a vast sheet of ice stretching ahead of you, as far as the eye can see. Feel the -45 degree temperatures as your body is buffeted by winds of over 100km/hr. Your mission: Ski over 1000km solo across the Antarctic ice to reach the South Pole, pulling a 66kg sledge with everything you need to survive. Would you have it in you? We meet two women who did...

Jenny Wordsworth is a British lawyer and ultra-endurance athlete. She has competed around the world in multi-day running events. The grit and determination ingrained in her from these experiences has proved fundamental to her success skiing solo to the South Pole. This was Jenny’s second attempt after she was medically evacuated 22 days into her first attempt last year with a bowel infection and peritonitis. You can read more about this here. 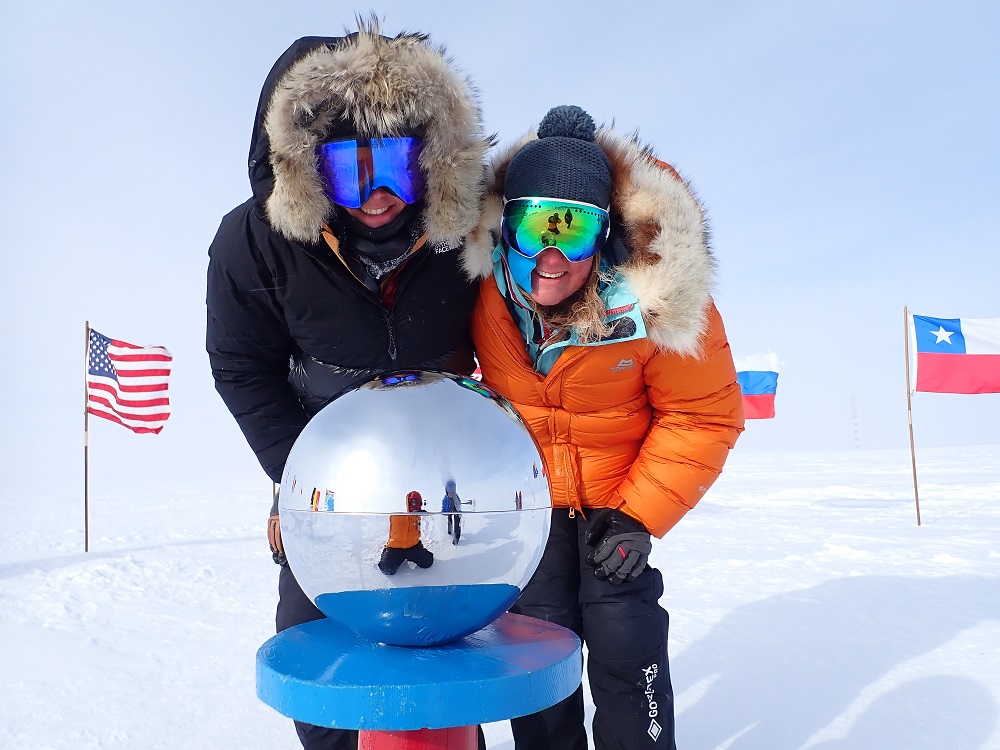 Despite their adventures happening over the same time period. The two women were on totally separate missions, coming together by chance at the South Pole.

1. Can you both start by helping us understand your motivations behind the decision to cross Antarctica?

JW: After my previous attempt ended early due to illness, I started plotting the return whilst in hospital in the UK. I am so grateful for the sponsors who had such faith in me that they were immediately on board when I said I’d like to go back. Having grown up reading any book I could get my hands on about women in the Antarctic, crossing the Antarctic has been a lifelong ambition and this trip was 3 years in the making.

MH: Antarctica has always held a huge allure for me. Two years after summitting Everest I was ready for my next expedition so I turned by sights to Antarctica. I wanted to take on an expedition that would test me differently to any climbing expedition I had done before. 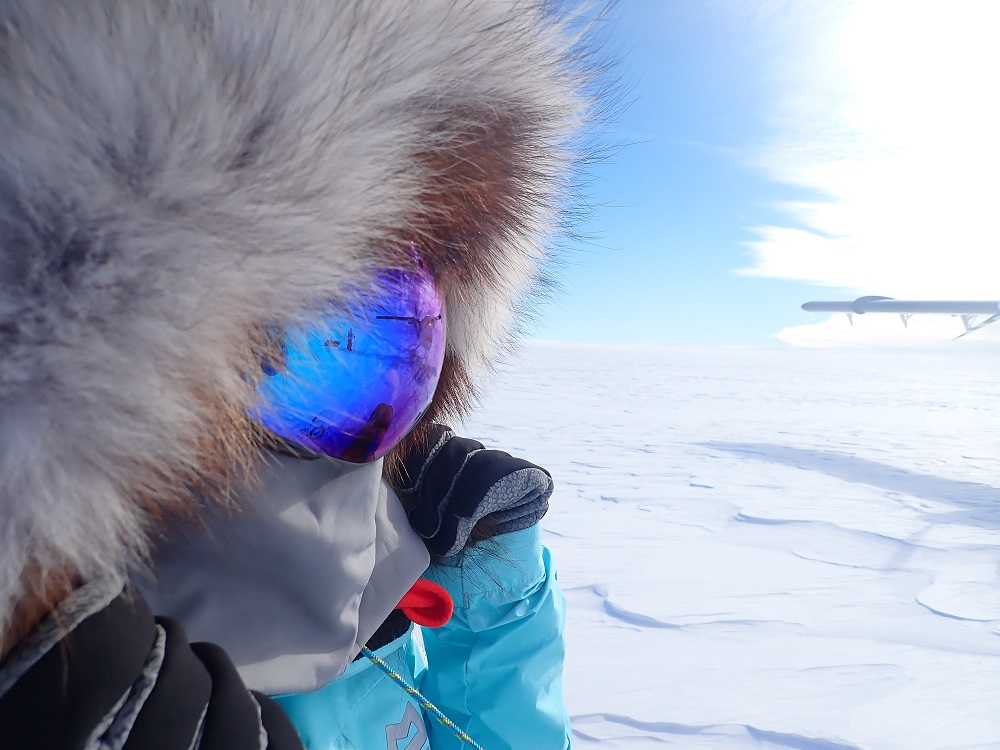 "Antarctica has always held a huge allure for me. Two years after summitting Everest I was ready for my next expedition so I turned by sights to Antarctica."Mollie Hughes

2. Your expeditions were totally separate - how aware were you of one another?

JW: I reached out to Mollie as soon as I had announced my expedition. It was so incredible to have two of us heading to Antarctica - Best WhatsApp group ever! Mollie set out a week ahead of me and I followed her progress online right until I set off a week after. It was about 11pm 350 nautical miles in when I saw her tent the horizon. We hugged each other so hard when we met the next day, it was the first human contact Mollie had had in over a month. We skied together a bit before I pressed on ahead, meeting again at the South Pole a day apart. We shared a lot of laughs at the Pole while the weather cleared and we made our way home.

MH: Jenny was so helpful having been there before and it was great to speak to someone going through the same thing. The first time we actually met was at 86 degrees south in the middle of Antarctica. We came together over the ice for my first hug in 39 days! 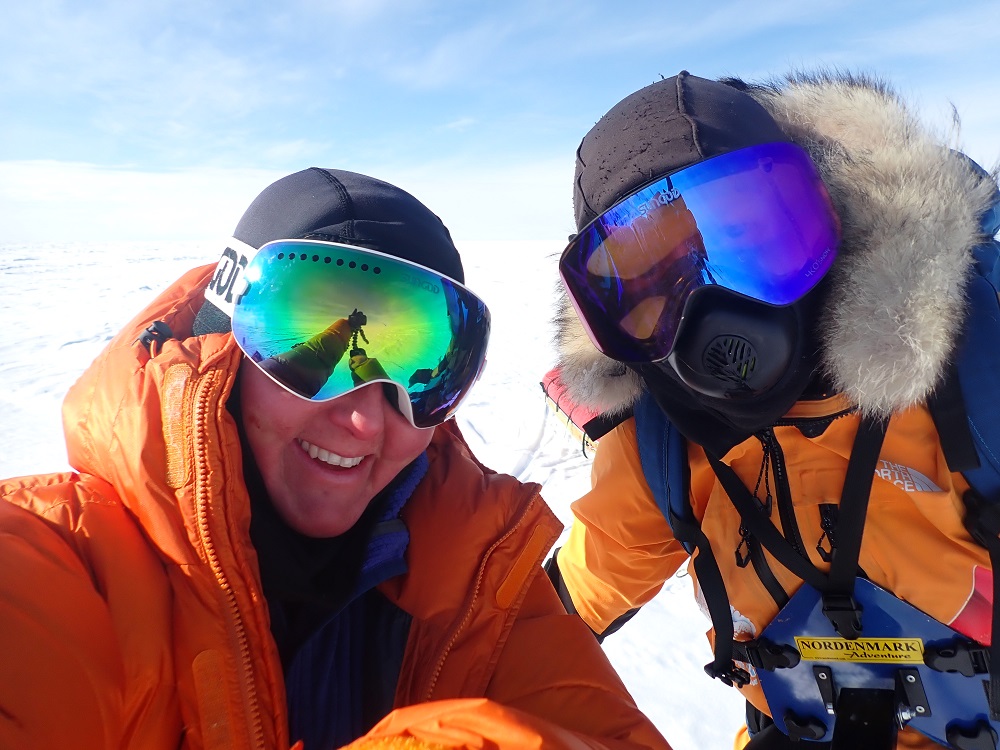 "Mollie hugged me so hard, I was the first person she’d seen in 34 days!"Jenny Wordsworth

3. Did the isolation get to you at all?

JW: I have never struggled with isolation really, it’s a luxury to get away from the distractions of daily life and enjoy the peaceful solitude. No WiFi, no social media, just you and your thoughts. It always makes me come home more grateful for my family friends and the world around me.

MH:The isolation wasn’t quite as bad as I thought it would be. Each night I would have to ring into the basecamp for a quick 5 minute call, giving them my location, letting them know I didn’t have any medical issues and all my kit was fine. I would ring my girlfriend once a week to check in and I think I managed to ring my mum twice on the expedition. So I had some communication! I think because I had a task to do, I was never not busy. There was always skiing to be done, snow to be melting, kit to be fixing, there wasn’t time to feel lonely.

JW: Entering into a meditative flow state. I worked really hard in training to get into this mind state and when I was in it, the hours flew by!

MH: I had all 7 Harry Potter books on my Ipod! This really helped to take my mind away from the situation and have some mental stimulation. I had read them all as a kid, but forgotten so many of the stories. They are just so good. 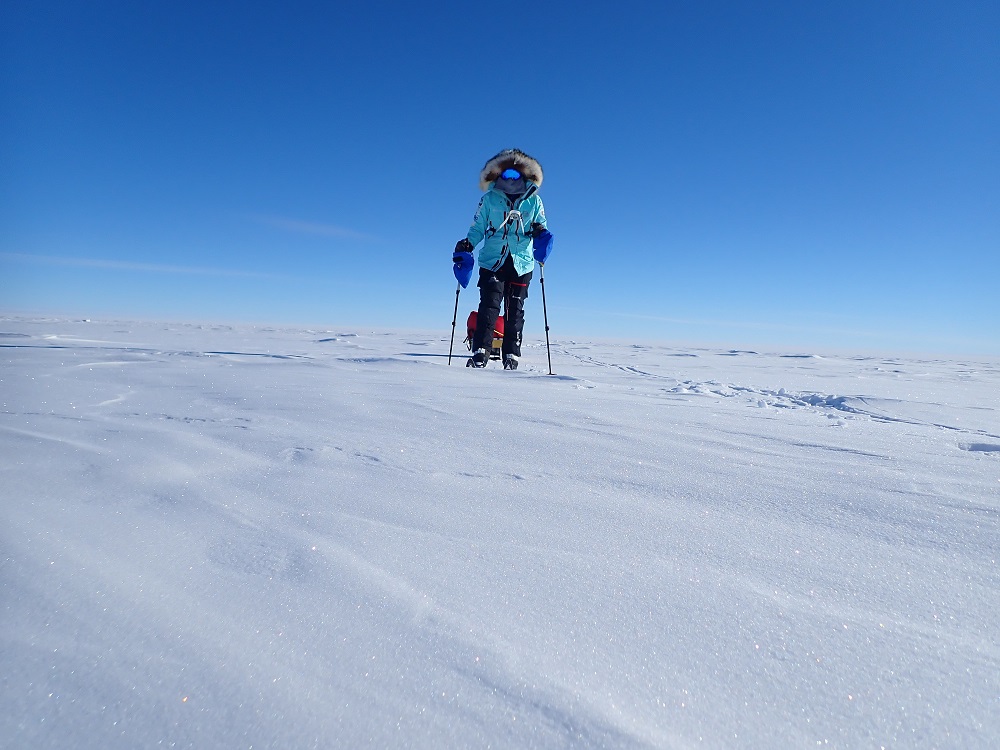 Harry Potter books and meditation helped pass the time as the women skiied 18 hour days in total solitude to reach their goal.

5. What was your lowest moment?

JW: The day the ulcers on my leg (called Polar Thigh) all split open after a fall in some ice sastrugi. I felt and heard as the inside of my leg split and it became one large hole. I lay there with this beautiful blue sky all around me and just allowed myself five minutes of laying in the snow to let all my tears out, then I got up and got on with it. I had another 200 miles left to go, and until then I was on pace to break the world record, after injury it was quickly obvious there was no way I’d be able to maintain the speed needed so it became about simply reaching the Pole.

MH: The first two weeks of my expedition were some of the hardest in my life. Shortly after setting off, the weather came in and I endured 8 days of total white out, not being able to see a meter ahead, winds of over 50 knots and temperatures as low as -45. It was exhausting! It was only after the weather cleared that I could make real progress. 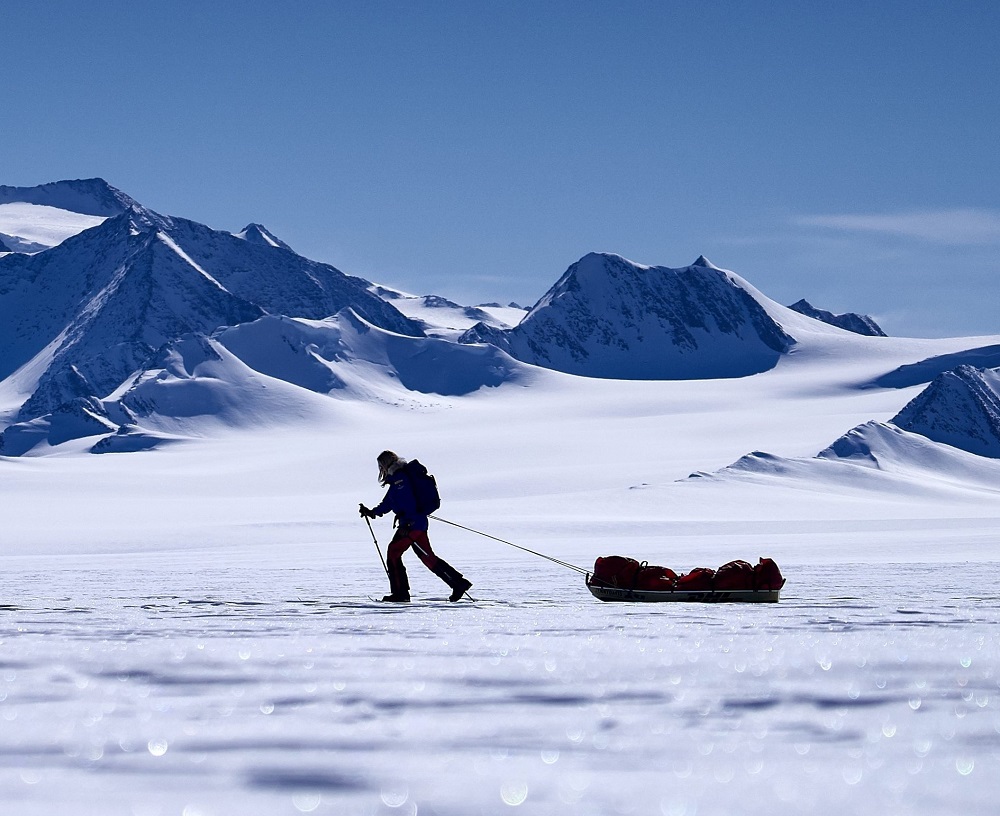 "I lay there with this beautiful blue sky all around me and just allowed myself five minutes of laying in the snow to let all my tears out, then I got up and got on with it." Jenny WordsworthPhoto: Hamish Frost

6. What did you perceive as the biggest challenge before you set off? How did this compare to the reality?

JW: As someone who prioritizes sleep, I was concerned about how the sleep deprivation would impact my performance. In reality it didn’t matter too much, I found it was the quality of sleep that mattered. I think also the determination to succeed kept me going along with the 24 hours of sunlight!

MH: I had thought the biggest challenge would be coping alone and making decisions by myself. In actual fact, my training paid off and I felt pretty confident on the ice! The biggest challenge was actually the weather, I hadn’t anticipated it would be so bad – 8 days of white out was rough!

7. Jenny, does your success feel sweeter having felt the sting of not succeeding in your first attempt?

JW: I’m just so happy to have reached the South Pole. I didn’t get the speed record as planned but knowing I was on pace to achieve it for over 500 miles is enough for me. That first attempt taught me that the world record was definitely something I had the physical and mental ability to achieve, I was fortunate to be able to return a second time and I’m forever grateful to my sponsors and partners for helping to make that happen. 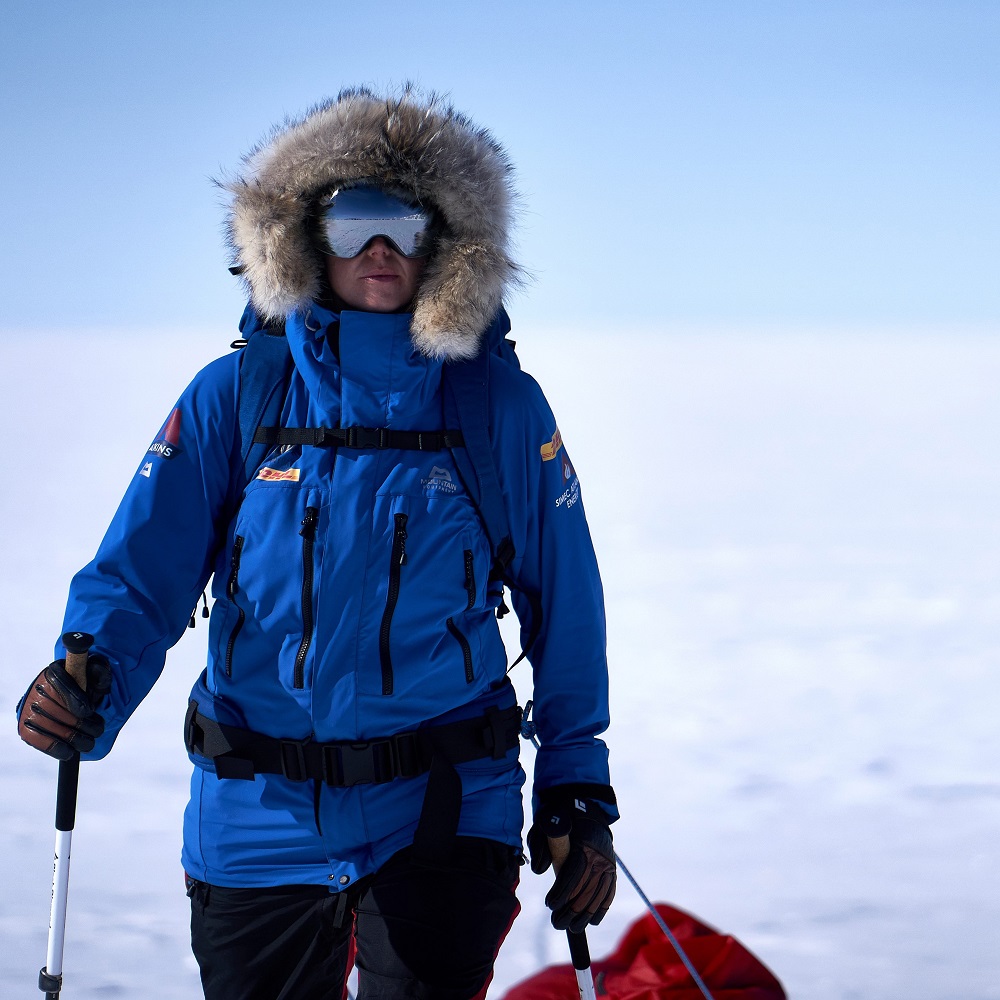 “I never entertained or let any thoughts into my head that I wouldn’t make it. There was simply no way I wasn’t reaching the South Pole. it was the hardest thing I have ever done.” Jenny WordsworthPhoto: Hamish Frost

8. Mollie, how did this expedition compare to Everest?

MH: I’m still trying to figure it out but I think it was harder. This is mainly because I was completing it solo, with no one else to rely on. No guides, no Sherpas and no one to give me a hug when things got tough! I had to rely on myself to make decisions and when I finished, I realized I hadn’t laughed for over 30 days! 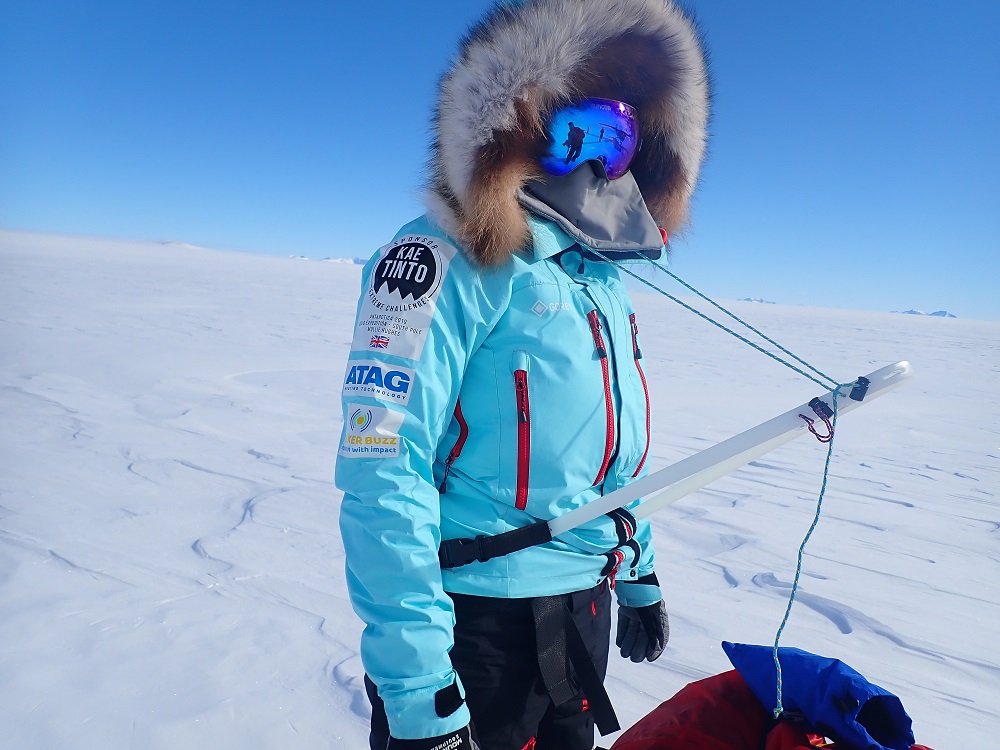 "I think this expedition was harder than Everest, I had to rely on myself to make all the decisions."Mollie Hughes

9. What did you love most about AntarcticA and what do you miss most about it?

JW: So much! Firstly the people who work at Union Glacier (the main basecamp for Antarctic activities). They’re all so inspirational and they don’t even realise it! I also loved the snow, the skies and just being in awe of our beautiful planet.

MH: I loved the scale and the vastness of it, it’s an expanse of white open space as far as the eye can see! I’m still very much enjoying being at home at the moment though! 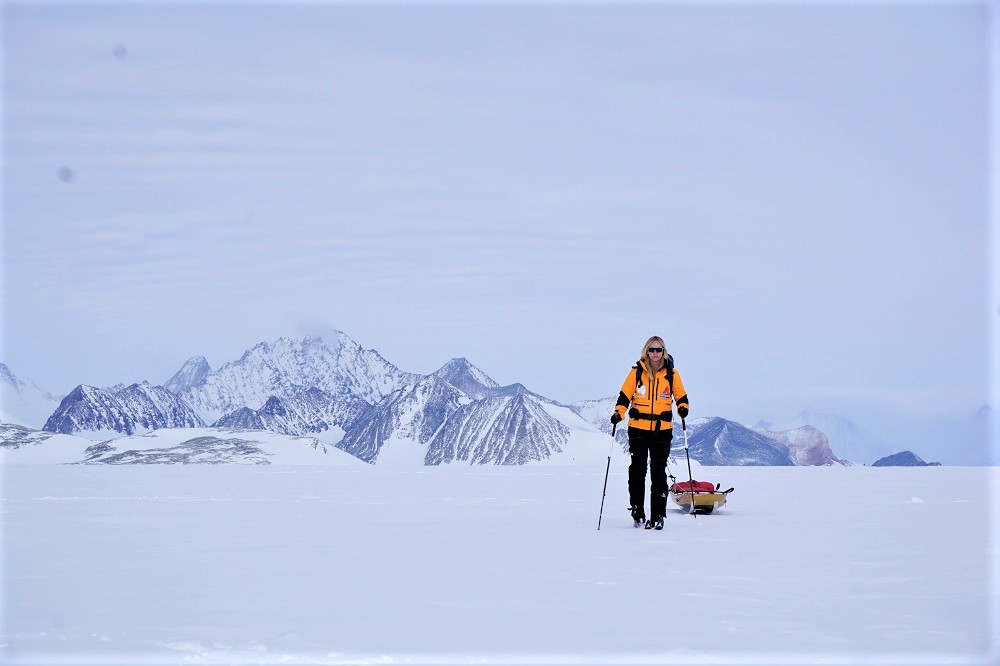 "I loved the snow, skies and being in awe of our beautiful planet."Jenny Wordsworth

10. How have your expeditions changed your outlook on life?

JD: My experience has taught me that we all have far too much stuff. I’ve returned home with a real loathing of non-essential belongings. We also need more female role models in the media. To be it, you have to see it.

MH: I feel more proud of this expedition than others I have done. It’s made me realise that with hard work, resilience and commitment anything is possible. I want to share this message with as many people as possible, particularly women. We’re all capable of extraordinary things and I want to inspire more women to take on challenges and push their own barriers. 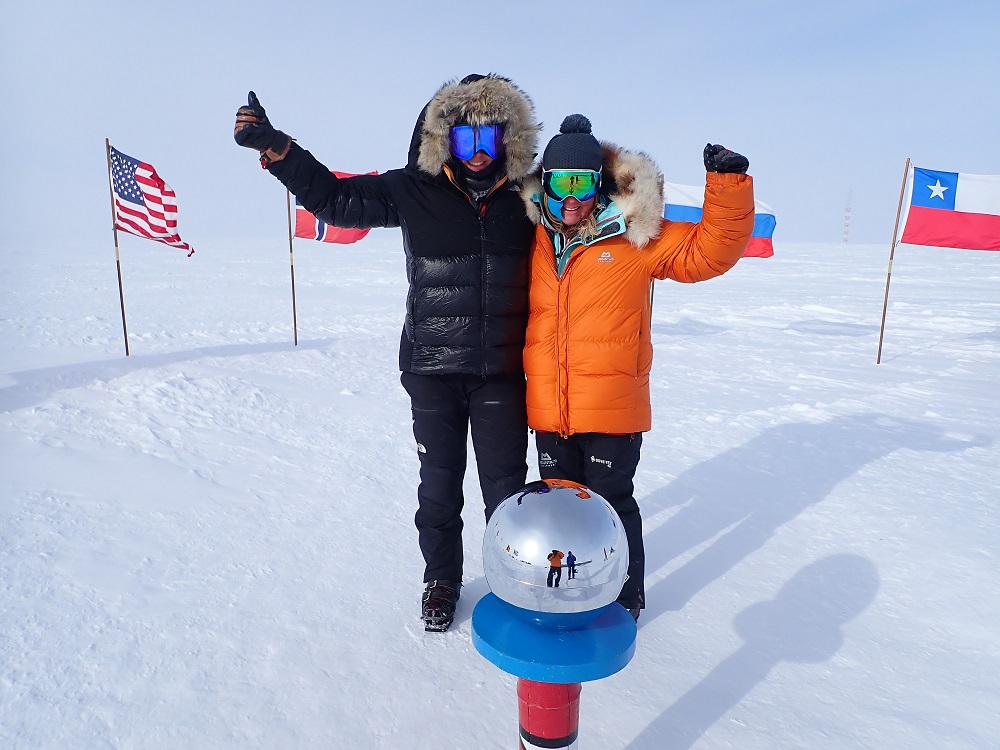 "We’re all capable of extraordinary things and I want to inspire more women to take on challenges and push their own barriers. "Mollie Hughes

Feeling inspired? The sheer grit and determination shown by these two people is remarkable. We’re proud to work with them as Ambassadors and the work they do in inspiring a new generation of adventurers. We cannot wait to see what they do next… 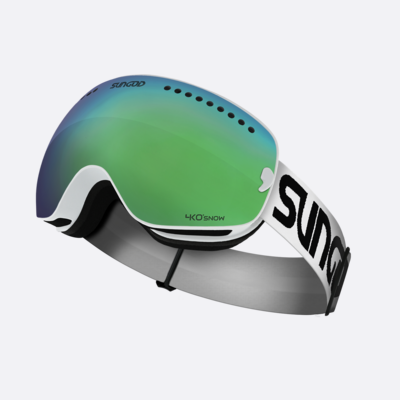