A team of four friends, drawn together by life in London were all clamouring for more adventure in their lives. Jay Dike, Jamie Fulbrook, Jonny Miller and Charlie Bilsland were adventurers already, whether it was paddle-boarding the Channel, hiking across the Atacama, sailing around Cape Horn or hitch-hiking from Istanbul to London, they were fairly comfortable being uncomfortable. This is the chronicle of their journey.

We’d come together one evening to plan an adventure. It was the cold days of February, and we yearned for rivers and mountains, and sunshine and action - paralysed by our jobs and projects, and all the minor crises that inhabited our days, we were drawn to the simplicity and clarity of stand-up paddleboarding down a river in August, from source to sea. 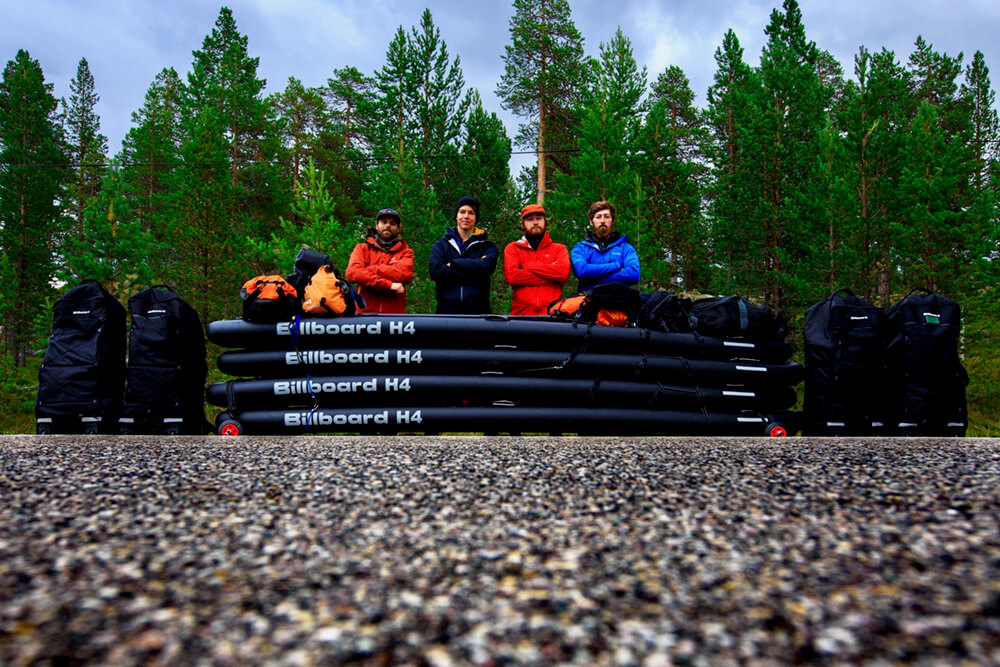 Videos and maps soon came out, and Alaska, Iceland, Norway, Sweden were all bandied around, but we kept coming back to Scandinavia - close enough to be accessible, but wild enough to be a challenge. Rivers were measured, and mountains mapped, and a plan began to grow in our heads. We talked to friends who had SUPed rivers, and friends who had travelled in Scandinavia and soon we were decided on an aptly named river, the Klara, or clear river. We realised then that we were going on this adventure not to simply paddle, but to give ourselves space for us to find clarity, on the Klara.

As the months wore on, the trip became more complex, with unmapped and unnavigable rapids, dangerous lakes and inaccessible starting points - it often seemed like we’d bitten off more than we could chew, but what’s an adventure without a challenge? As our due date came closer, we amassed an incredible array of equipment and local knowledge, and finally we were flying into the wilds of Roros, an ancient copper mining town in the Highlands of Norway. 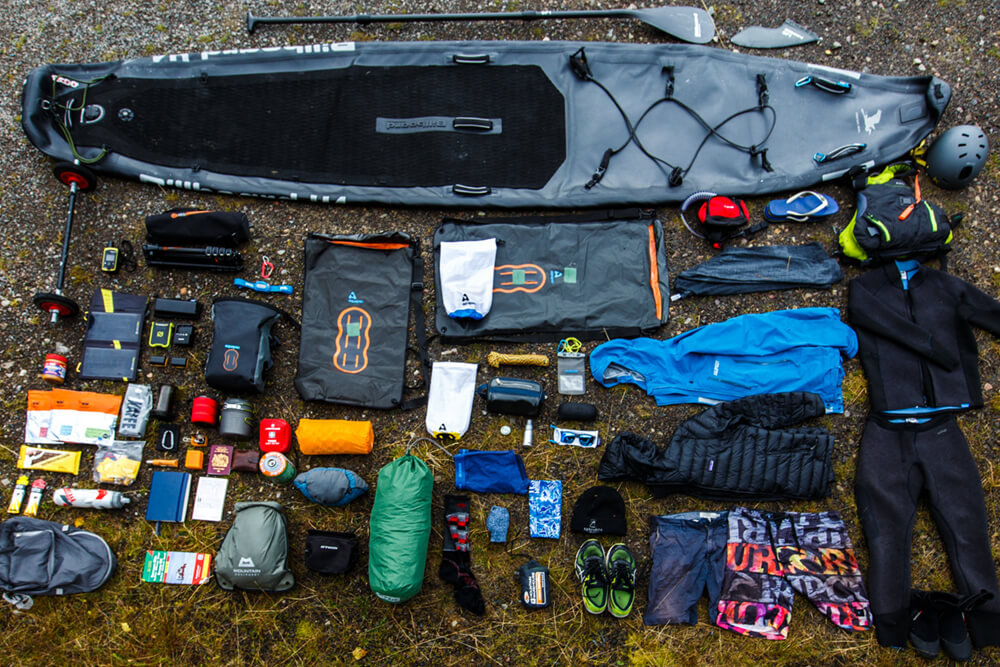 After a rest and test day, we got our SUPs on the water, and our equipment bagged and we were off! The first section of water was the Roa, a small river, with many shallow rapids and lakes, and so for the next four days, portage - lifting all 220kg of our equipment out of the water and along broken game trails - became the name of the game. The final section of the Roa was impassible, and so consisted of us dragging 55kg of kit each, across 10km of dried river beds, fetid swamps and broken pine brush, all in a howling Norwegian downpour. The end of the trail deposited us on the shores of Lake Femunden - a 60km long lake, well-known in the area for having a high number of deaths every year. 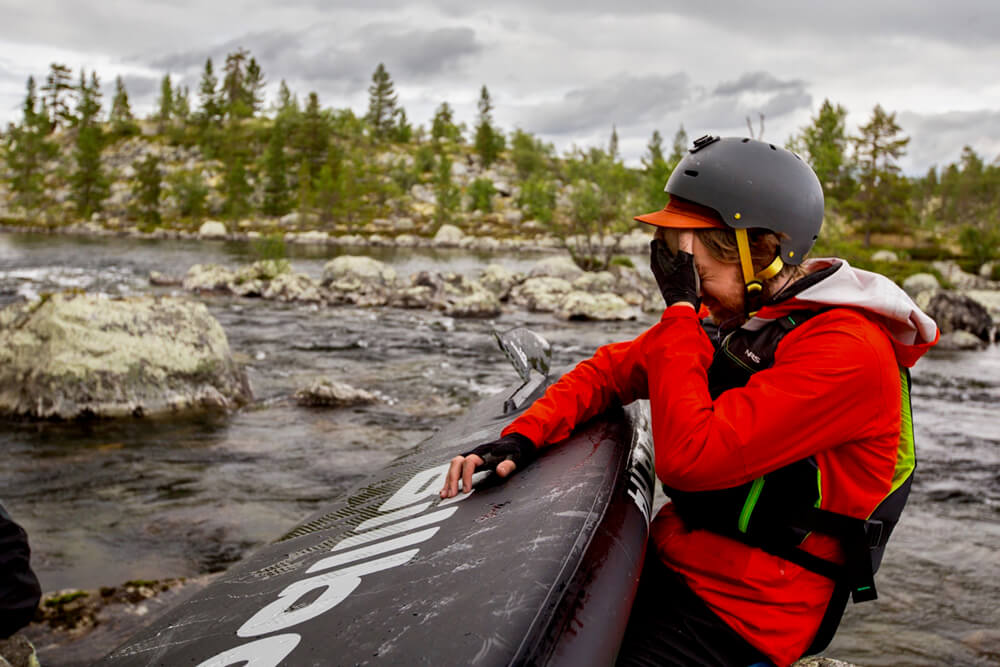 We needed a break, and we needed food. Although only 30km in length, the Roa had taken us four days (the usual length of time taken is twelve) and we were the first people to have ever taken SUPs down it. As the weather closed in, we were told that the final ferry of the season was arriving the next morning, and it could take us 30km down the lake. It was a difficult decision to take it, and emotions were running high when we made the decision - we definitely felt that we were compromising the integrity of the trip by doing so. While on the ferry, we talked a lot more about how much the Roa had taken out of us, and how we all felt about the expedition so far. Thankfully we were all able to be emotionally open and really tell each other how we felt, and over the course of the next day, we spent a good amount of time talking and making sure we all understood each other, and the purpose of our journey. 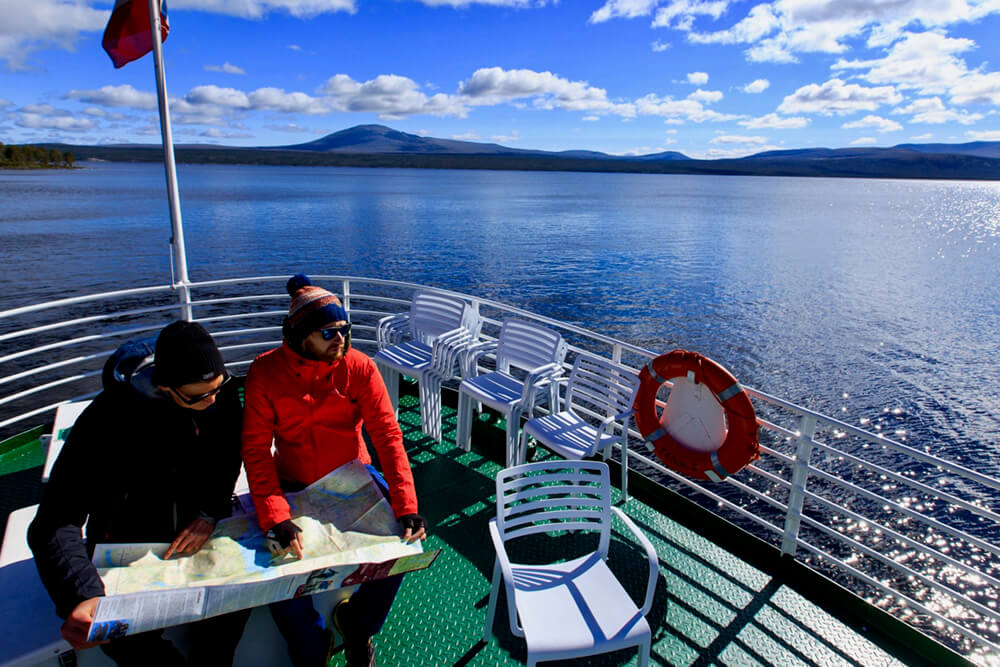 Although we were only on Femunden for two days, the experience was intense. When the winds were high, it was like being at sea, with glacier-cold waves crashing over the nose of the board at one point, then waves coming from the side to flip you off at the next. We struggled through the lake, and at one point had to wheel our boards along the broken trail along-side, as the wind was so strong we were being forced onto the rocks on the shore. Femunden ended, and we passed into Lake Isteren and Lake Galt, where the water was glassy, the sun was out and the wind pushed us gently forward, almost rewarding us for our perseverance. It was exactly what stand-up paddleboarding was made for - pulling long strokes, gliding across a perfectly flat lake with the sun beating down on us, calling out to each other and those we saw on the lake - a perfect moment. We spent an entire day enjoying the sun and the gentle water, recovering from the ferocity of Lake Femunden, but it wasn’t to last.

The lakes finally came to a close, and we were ready to enter the river properly. We knew that the start of the Klara was full of rapids, but we had no idea what we were in for. As we started pushing down the headwater, we slowed to a snail’s pace. Incredible rapids, much bigger than our research and friends predicted, meant that our first kilometre took us three hours. Every rapid required us to approach it slowly to scout out if it was passable or not, and if it wasn’t, a trail had to be found before we could haul our boards and kit out of the water and through the dense pine forest. 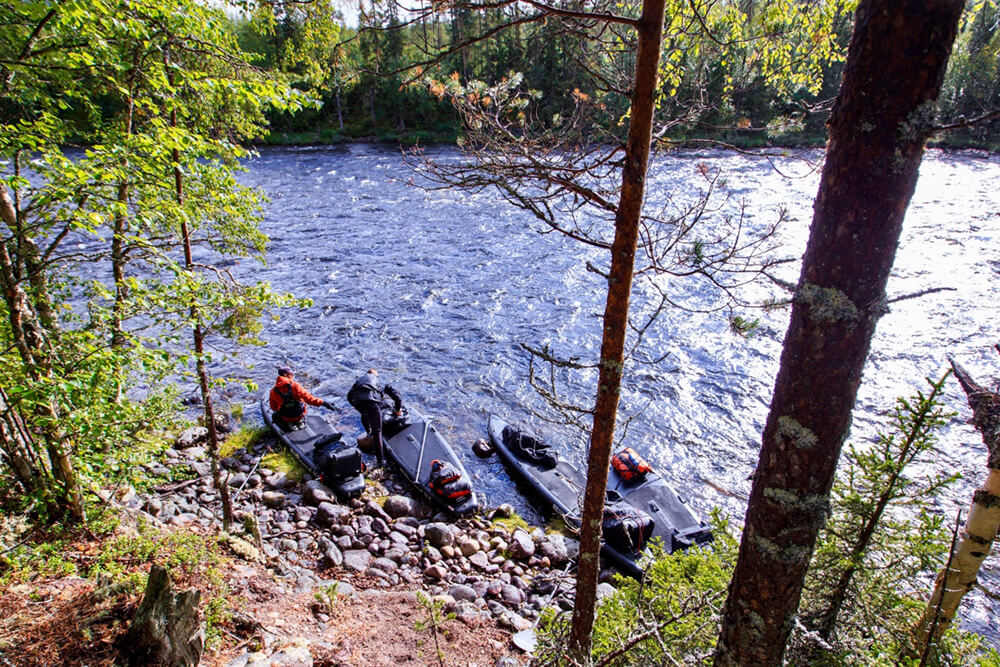 Loading up the boards once again. Only to unload them again 1km further down.Photo: Jay Dike

Thankfully, the further we got, the less intense the rapids got, and by the end of the day the river had turned smooth, but still lightning fast, and we got our first taste of sheer joy. We were able to look down, and see two metres straight down (not named the clear river for nothing) and the rocks were flying by. It was incomparable, to be moving so fast with such little effort, and the feeling was indescribable. As the sun began to sink, we came upon an old man and stopped for a short chat about the condition of the river. Peder told us, to our great delight, that the river was fast and smooth for the rest of the way, and then proceeded to blow our minds and offered us a few beers he was carrying. At once, all our fortunes had changed - the river would be manageable, and we had beer! 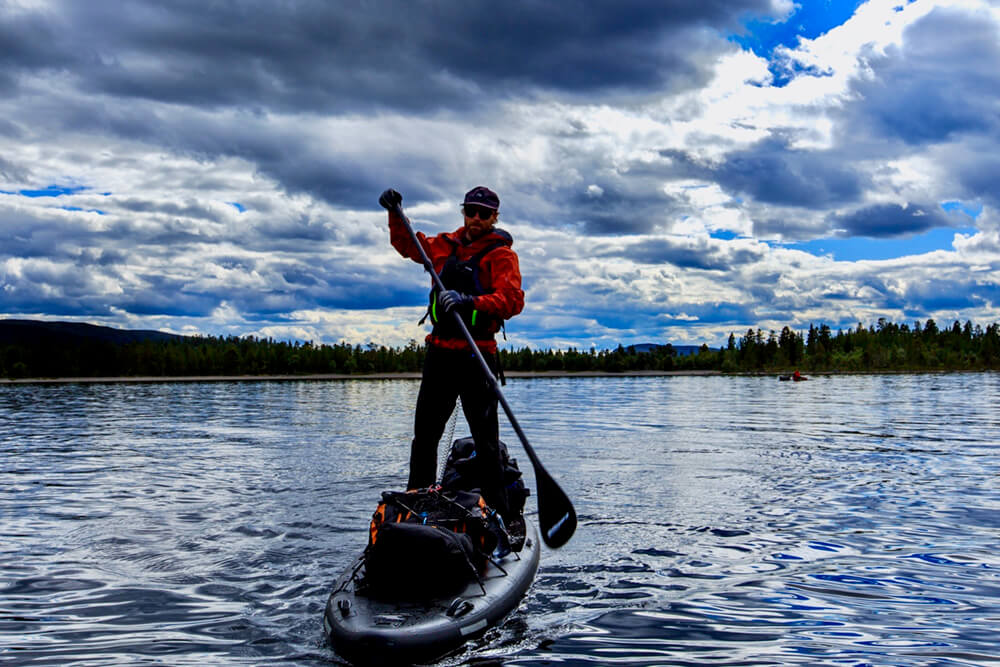 The next day, our hopes were dashed. Five kilometres of the most perfect conditions stopped suddenly, and we had to portage again and again and again, with the rapids getting progressively worse, before we had to pull ourselves off the water entirely - with the speed and flow we were finding it increasingly difficult to keep safe, and as a team, were definitely uncomfortable with the danger we were in.

Thankfully, we had brought wheels for this occasion, and we managed to rig up all our boards and kit into a makeshift cart, and were soon trundling down the road to where we were told the rapids ended. Almost immediately after launching again, we were out of our depth - the water was dangerous, unpredictable and punishingly hard to manoeuvre. With dread gnawing at our bones and hunger at our stomachs, we pulled everything off the water and re-assembled our cart. Hours later, as darkness slowly came on, we came upon a campsite, and set up for the night. With food supplies dwindling, and the next supermarket sixty kilometres down the river, we were at a loss. 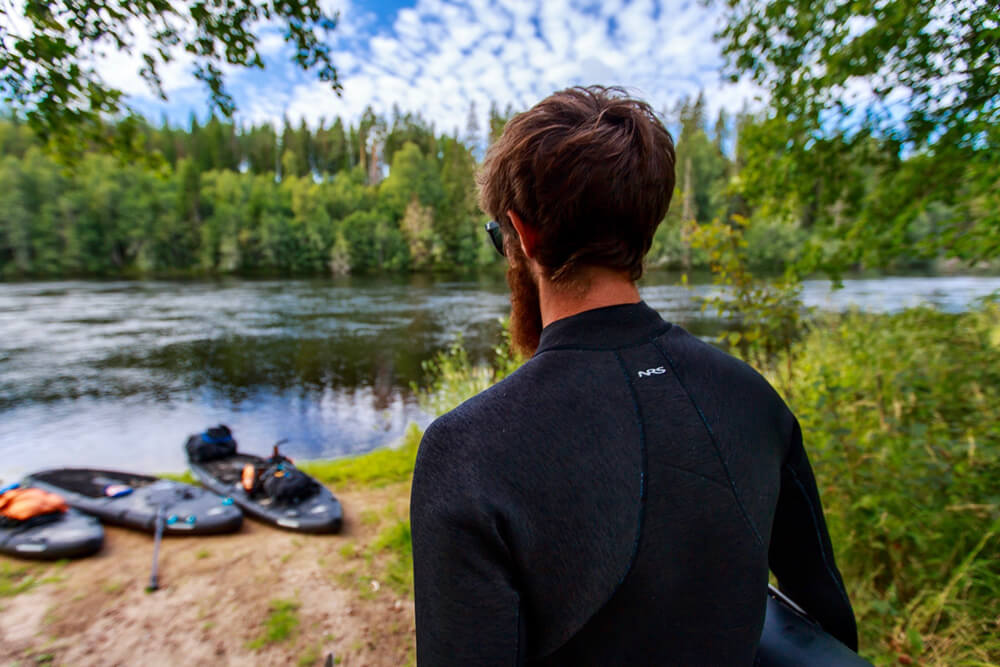 Prepping for a day of calm, Klara waters back on the Swedish sidePhoto: Jamie Fulbrook

The next morning dawned no better, with a steady rain dampening our already depleted spirits. We rigged up our improvised cart and pushed on to the next village, checking the status of the river every half a click or so, desperately wishing for an end to the rapids, but it didn’t improve - we would later find out that Scandinavia had received record levels of rain for August, and this had swollen the power of the Klara significantly.

With a heavy heart, we sat in a tiny village in the mountains, eating the last crumbs of our food and wondering what could be done. Hitch-hike to the nearest town, then bring food back and continue on? Push on and try to make the distance on the river? We were paralysed by indecision, but we eventually realised that so far, the river had continually wrecked our carefully laid plans, and we genuinely had no idea when or where the water would be navigable again.

The decision was made that we would attempt to make it south, to the nearby town of Trysil (co-incidentally Norway’s largest ski resort), and make a plan from there. We made friends with a local kennel owner, who soon called his father-in-law away from his holiday to drive us south to the mountain town. After a few days rest and recovery, it became clear that the expedition was over - with our time running short and hundreds of kilometres left, we decided to spend our last days paddling a stretch of water further down the river. After a couple of bus rides through the Swedish countryside, we were comfortably camped on the side of the Klara where we spent two days of simple, gentle paddling, among timber rafts and kayakers, talking and laughing, making coffee on the boards and enjoying being able to relax again.

It was an incredible expedition, with such intense experience and difficulty. Although we weren’t able to succeed in our goal of being the first SUP from source to sea, we came away with a newfound respect for each other and the river, and a set of unforgettable memories.